Turku Castle was founded at the end of the 13th century, when Southern Finland was annexed by Sweden. The exact name of the founder is not known, but at that time Sweden was ruled by the Bjälbo family. A castle camp for the Swedish army was built on the island of Aura River, which later grew and expanded into a large stone kingdom castle. Due to land uplift, the island joined the mainland and nowadays few notice it was one.

At the end of the 19th century, the Turku City Museum began to operate in the forecourt and the restoration of the castle was planned. However, the restoration of the main castle did not begin until 1946 and lasted more than 15 years. Most of the castle’s rooms have been restored to their original state, and there is a historical museum in the castle. The castle is a very popular tourist destination and is one of Finland’s nationally significant built cultural environments. 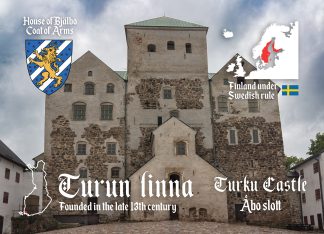