The city of Tallinn is located on the other side of the Gulf of Finland in Estonia, about 80 km from Helsinki. The origins of Tallinn date back to the 13th century and it has been a part of Estonia, Denmark, Germany, Sweden and Russia. Estonia was an independent state from 1918 to 1940, after which it was a Soviet socialist republic under the Soviet Union. Estonia regained its independence in the autumn of 1991 and Tallinn became its capital.

The Old Town of Tallinn, Tallinna vanalinn, was inscribed on the UNESCO World Heritage List in 1997. There are many popular attractions such as Tallinn Town Hall, Niguliste Church, Oleviste Church, Tallinn Cathedral and the Estonian History Museum.

The photo is taken from one of the narrowest streets in the Old Town. The area is filled with colourful buildings and cobblestone pavement, which creates a charming and nostalgic atmosphere.

This card features a special matte finish, which feels soft and luxurious. The special coating prevents fingerprints and smudges, too, so feel free to touch it! 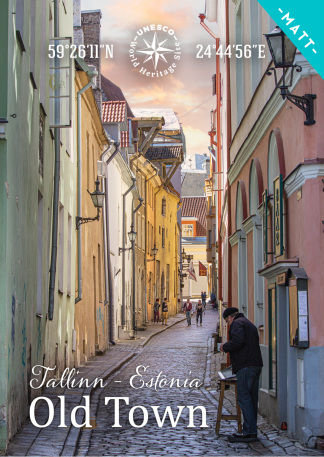 You're viewing: Narrow street in the Tallinn Old Town 1.30 €
Add to cart