Salty liquorice (or salmiak) is a traditional candy most enjoyed in the Nordic countries, Germany and Netherlands. It is made by adding ammonium chloride (NH4Cl), also known as salmiak, to black liquorice. Ammonium chloride looks like white powder, and the candy gets its color from medicinal charcoal. Ammonium chloride is also used to give flavor to cough medicine, alcoholic drinks, ice cream and even for marinades. Consuming too much ammonium chloride or salty liquorice products can elevate your blood pressure. The taste is unique: sweet and salty at the same time. You either love it or hate it: some people don’t like the taste at all, and some can’t get enough of it. There’s the Finnish Salty Liquorice Association for die-hard fans of the stuff, and they give the Salmiakki Finlandia Award annually for the best salty liquorice sweet of the year. 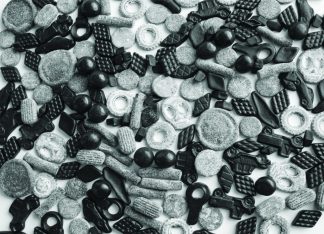