Kuopio City Hall, completed in 1885, represents the Neo-Renaissance style. It was designed by architect F.A. Sjöström and the construction work was led by architect Josef Stenbäck. In 1900, the clock of the town hall was acquired and the text “”Oikeus kansaa ohjelevi” (Justice guides the people) was added to the west end of the building and “Wapautta laki vartioivi” (The law guards freedom) to the east end. The words are from A. Oksanen’s poem.

The building has been altered several times over the years and was restored and renovated in the 1970s. The City Hall was chosen as one of the three most beautiful municipal buildings in the Most beautiful municipal buildings poll in 2009. The City Hall is on the northern edge of the market square and there have been e.g. library and restaurant. Today, city staff work there, e.g. mayor, and its ballroom is rented for valuable occasions.

The card image is a watercolor work painted by Ronja on site, then scanned and digitally edited as a print file. 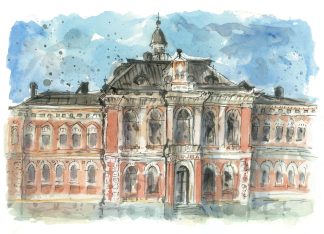