Marjaniemi lighthouse on the map

Hailuoto island is in the northernmost part of the Baltic Sea, the Bothnian Bay, about 50 kilometres from Oulu. The lighthouse is on the westernmost part of the island, in the village of Marjaniemi, where have been different signs for sailors since 1770.

Marjaniemi lighthouse was designed by  Axel Hampus Dalström and it is 25 m high and the light is 30,2 m from the sea level. The lighthouse got its light on in 1872 and nowadays the light can be seen from 30 kilometres away. During the summer season you can go up the 110 stairs with a tour guide. The lighthouse also has a webcam. https://www.hailuoto.fi/majakkakamerat/

There is a pilot station near the lighthouse, built in 1962, and in the same building there is the Bothnian Bay Research Station of University of Oulu.

Hailuoto is Finland’s third largest island and about 7 km or less than half an hour’s ferry ride away from Oulunsalo. A road on ice is also used in the wintertime. There are plans to build a bridge, but they have not yet come true. From the port of Hailuoto, Huiko, the distance to the lighthouse to Marjaniemi is still 30 km. Hailuoto is one national landscape of Finland and the whole island belongs to Finland’s nationally significant built cultural environment. The island has several Natura 2000 protected areas and many bird species found in them are of particular interest to bird watchers. 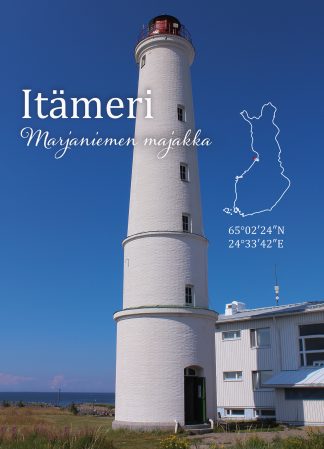 You're viewing: Marjaniemi lighthouse on the map 1.30 €
Add to cart