We frequently get requests for cards of specific locations, and we’ll provide some in the future, little by little.

The first one is of Mikkeli, and one of the local sights of the area, Naisvuori water tower. The tower was built on the highest point of the city in 1912. It’s the second oldest water tower in Finland, and the oldest that still exists – although it’s been out of use since 1953, and only is used as an observation or sightseeing tower ever since. It has a cafe during summer months, and a summer theater nearby. The Communications Center Lokki museum is located inside the Naisvuori hill, and also some regional archives and some facilities of phone / Internet providers. Naisvuori has also bomb shelters and a swimming hall built into mined caverns of the hill. 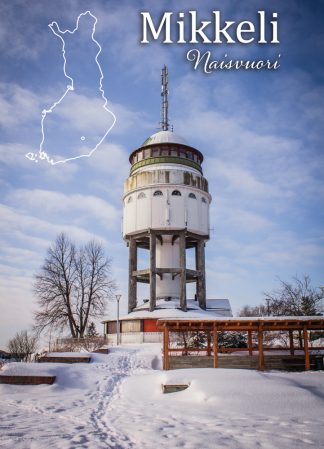