Each region (maakunta) in Finland has a flower or a plant chosen to represent it. This symbolizes the regional flora and the nature of the region.

Coltsfoot was a provincial plant in Eastern Uusimaa until Eastern Uusimaa was consolidated with the region of Uusimaa. It is the first flower in the spring and an important honey plant for the first insects of spring. It grows in open spaces such as roadside, courtyards, gardens and wastelands. The rootstock of a perennial plant is a long, branching and difficult-to-root weed. Because the flower embryos are already developing the previous year, they are ready to bloom as soon as the snow melts after winter. The bright yellow flowers are individually 10-30 cm long at the end of the stems and after flowering they become dandelion-like fluffy balls. The leaves of the plant appear after flowering, and the flower is named after this way of growing.

Coltsfoot is called “cough worth” because it has been used as a herb for cough and bronchitis but also to treat wounds and skin problems. The leaves have been used as tea and extract and have been smoked like tobacco. However, the plant contains substances harmful to the liver and carcinogenic, ie it should not be used as a herb. 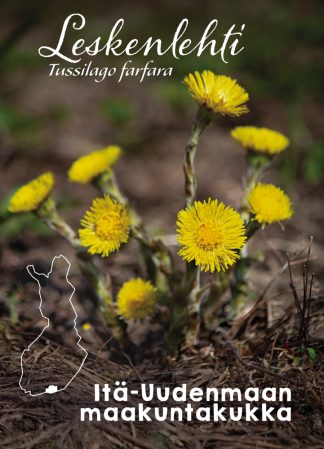