UNESCO Global Geoparks (UGGs) are comparable to national parks and UNESCO World Heritage and Biosphere Reserves. Saimaa Geopark received the UNESCO status in April 2021 after years of preparatory work, and the status is valid for four years at a time. Before  Unesco granted this status there was plenty of background preparations e.g. Natura 2000 – areas and development of nature tourism in the area.

Saimaa Geopark is a unified area formed by nine members (Mikkeli, Juva, Sulkava, Puumala, Ruokolahti, Imatra, Lappeenranta, Taipalsaari and Savitaipale) and it is located in South Karelia and South Savo. The area has special geological value there are nationally and internationally significant geological landscapes and attractions or sites of archaeological, ecological, historical or cultural importance.

Saimaa Geopark includes numerous geo, nature and cultural sites in different member municipalities, and those are presented on this website: https://www.saimaageopark.fi/en/geosites/

This picture shows Astuvansalmi rock paintings in Ristiina, Southern Savonia. The paintings are the largest in Northern Europe: 65 images have been painted on the rocks in Falu red, “red earth”. Topics include elks, people, boats, traces of hands and paws. The paintings are 8-11 meters above the current water level in Lake Saimaa, because at the time of the paintings the water level has been higher than now. The oldest paintings were made between 3000 and 2500 BC and are protected by a lip at the top of a curved rock wall and a layer of silica formed by rainwater flowing down from the rock.

The rock on which the paintings are made is special because it resembles a human head when viewed from a lake from a certain direction. It is believed that the Stone Age people have considered it a god or an image of it. Other ancient remains have been found in the area: four amber jewels were found in the lake at the cliff and two broken arrowheads were found on land. In addition, quartz finds suggesting a residence have been found nearby. 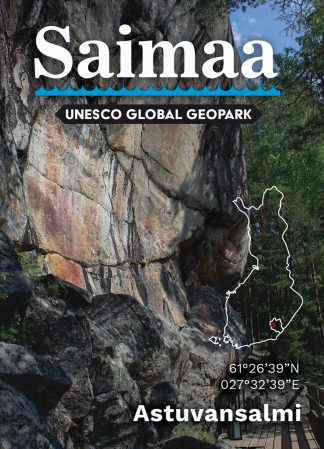